It is that time of year again. Fair season has begun and the Perseids Meteor showers are peaking!

The Perseid meteor shower, one of the brighter meteor showers of the year, occurs every year between July 17 and August 24. The shower tends to peak around August 9-13, this year the evening of August 11-12 is the night to watch. Now that does not mean you won’t see any shooting stars on other nights, my experience has been that if you are patient during August seeing a shooting star is just a matter of timing.

The Perseids meteor shower usually comes from the direction of the Perseus, a constellation in the north-eastern part of the sky. To increase your chances of seeing a shooting star and getting that wish granted, this picture of where to look might help! 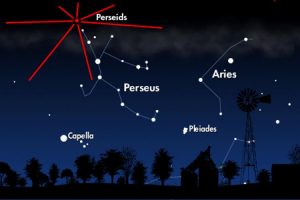 Nothing helps you recover from a hard day at the fair then sitting back and star gazing a magical light show courtesy of God.